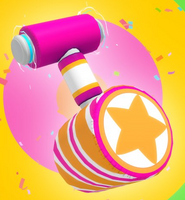 Yeetuses are special rotating hammers and can be divided, according to the dimensions, in: 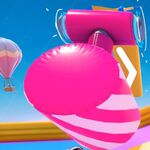 Big Yeetus is a rotating hammer in the air, except unlike regular ones, it only appears in alternative versions of rounds and spins much faster than usual. It appears larger and with a unique decoration of additional yellow stripes, and a big star on each face, however, it can also be decorated as a regular pink Swinging Hammer--After a while, an update should come out to fix that. It is an optional obstacle which can be used to get thrown to long distances. The obstacle is uncommon, but when it appears it is usually present near the end of a Round. It can be easily avoided, but if jumped into at the right time can work to the player's advantage. Hitting the hammer at the right time may cause the player to be thrown at a long distance, passing other players and potentially even clearing a round. However, not jumping into the hammer at the right time may cause the player to fall behind, so it's up to the player to choose if the Big Yeetus is a great choice or not.

Big Yeetus may appear in alternate versions of these games (or in the themed playlist, when available): 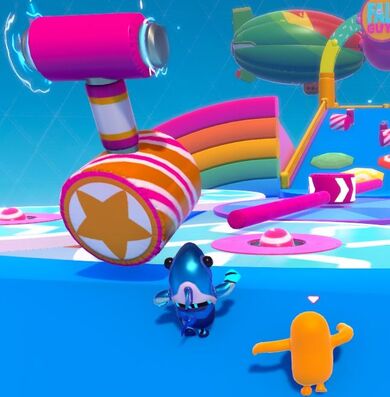 One of the Dizzy Heights variants includes a Big yeetus.

In Door Dash, the Yeetus may be present in the last section, after falling down from the last row of doors. In this game, usually a lot of players fall down at the same time and run to the goal, but only a limited number of them qualify. The Big Yeetus is positioned in the centre of the path, ready to throw the players to the goal, but if a player is not good enough to get hit, it may result in a fatal waste of time.

In Fall Mountain, a Big Yeetus may appear at the end of the conveyor belt section, the same section with the final crown at the top. Being hit by the hammer at the right time, may, in the luckiest case, throw the player directly to the crown, consisting of a Victory before the others. By the way, it is really risky since one wrong move can cost the elimination.

Two Big Yeetuses are present at the end of the belt of an alternate version of the game Fruit Chute, so if the player falls, he may be saved and thrown back to the belt.

A Big Yeetus may appear in the final section of See Saw, usually in a dead point of the map. Usually the player, at that point, would have to decide which seesaw take, the left or the right one, to continue his way to the goal. By the way, a Big Yeetus is in the central part, which can be used to get thrown in the further see saws. This Big Yeetus is extremely risky by the way, because it is easy to fall down or not to center the platform, since the platform may be inclined

In an alternate version, two Big Yeetuses may appear before the first rings wheel in Ski Fall. This may offer a better oppurtunity to go through the middle golden ring. 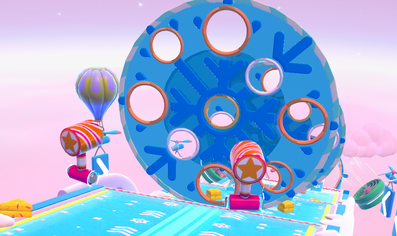 During Season 2, A Big Yeetus has been added in a dead point of the last section of an alternate version of Slime Climb, just before the last two slopes at the top of the course. Considering the risk of the course, since the player gets eliminated if he/she falls down in the slime, it can be avoided and it is the safer way. By the way, the Yeetus may launch the player directly to the goal if the player hits it really well. 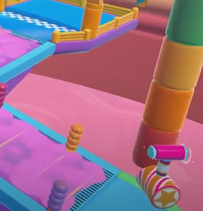 Using this Big Yeetus in Slime Climb is risky: a good hit can throw the player to the goal; a bad hit can throw him in the slime, meaning elimination

4 Big Yeetuses may appear in alternate versions of the game Tail Tag. Each Yeetus has an independent chance of appearing. Tail Tag has the most amount of Big Yeetuses so far.

A Big Yeetus in Tail Tag 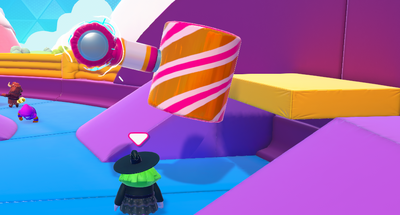 The same hammer from the upper picture in Tail Tag.

In The Whirlygig a different type of Big Yeetus may appear: this Big Yeetus doesn't rotate in the direction of the course but from left to right. It can just annoy players in the section before the wall jumps, and can be easily avoided by passing aside.

During Season 2, an alternate version of Tip Toe presents a Big Yeetus under the level. If the player fails, the Yeetus may save him and throwing him back to the game. In another case, the player may try to jump on it and be thrown directly to the goal. By the way, this Yeetus really adds difficulty to the game.

Starting from Season 2 mid-season update, a smaller Yeetus has been introduced, called Lil' Yeety. They aren't even as big as the character, but they are decorated like the big ones and rotate instead. They have a chance to appear in these games:

A contest was held for whoever was first to post a video of them saluting to all 5 Lil' yeeties. If you want to find them yourself I advise you not to continue reading.

A Lil' Yeety can be found under the left ramp in-between sections 1 and 2. Be careful as you can fall off the edge very easily from here.

A Lil' Yeety can be found under the center, red drawbridge. This Lil' Yeety is harder to spot during the Thicc Bonkus variation. Careful camera placement is required to snap a picture during this variation. This is the most commonly found Lil' Yeety.

A Lil' Yeety can be found next to the left, yellow pillar in the bottom part of the first section.

A Lil' Yeety can be found in the top corner of underside of the yellow bridge. Careful in not staying too long as someone can snatch your tail suddenly.

A Lil' Yeety can be found behind the fan after second section. The conveyer belt is raised allowing this little cranny.