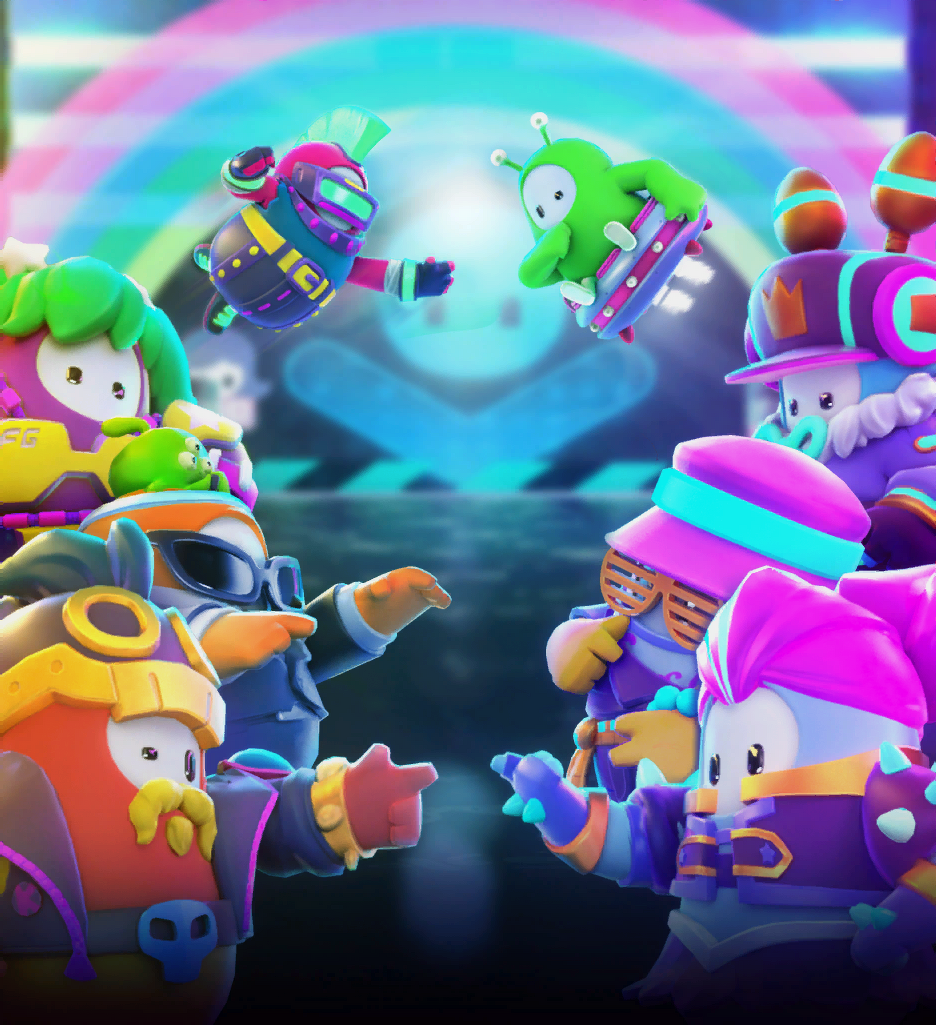 Win or lose as a Squad of 4 Fall Guys! Join as a party or find a Squad inside!

Squads Show is a gamemode that was introduced in Season 4. This mode places players into teams of four.[1]

It was initially a temporary gamemode, and became a permanent gamemode on 1 April 2021.[2]. Since the Season 5.Fun update it can occasionally be replaced by another 4-player squad show (e.g. Squad Celebration) for a couple days.

The initial end date for the playlist was on 5 April 2021 - but a hotfix on 1 April 2021 removed the countdown timer.

Squads Show was briefly removed on 20 July 2021 to make way for Squads Duos; however, player feedback caused it to be reinstated just a few hours later.

According to senior designer Joe Walsh, about 38 rounds are initially present in Squads Show.

Only two Hunt rounds (Bubble Trouble and Ski Fall) features in this playlist. Despite not specified as a Hunt round, Ski Fall has also been added.

Race rounds work based on a points system. Finishing a race earns points for your team. Placing higher in a race will earn your team more points. The teams with the most points qualifies for the next round.

Unlike other playlists, most races time out in less time than the standard 3 minutes. These timeout durations range from 2:00 to 2:30, and are map-dependent. Generally, race rounds will play out until all players qualify, though in rare cases they will end prematurely.

A hotfix pushed on 8 April 2021 added Slime Climb to this playlist.[3] It works like most race rounds; however, falling into the slime prevents you from scoring points for your team.[4] When The Slimescraper was added to the game, it was also added to this playlist, and functions similarly.

Survival rounds work based on a points system. For every second a team member survives, they earn their team one point. The bottom two teams are eliminated. In these modes, a timer is always present, even if the round doesn't have one in the main show (e.g. Roll Out).

Perfect Match fits into this category of rounds. Because of the typically low number of eliminations on the normal variant, the Perfect Deathmatch variant is always the one selected in Squads Show.

Sum Fruit also fits into this category of rounds.

While Block Party was initially in the round pool, it was removed in a hotfix on 24 March 2021, due to the low elimination rate causing random eliminations, but came back after the Season 5.Fun.

The only Hunt rounds, Bubble Trouble and Hoopsie Legends, works as follows - each squad has to score a certain total of points to qualify for the next round. This total is calculated by the score normally required in a solo mode, multiplied by the number of players in a full squad (e.g. Bubble Trouble would require 15 * 4 = 60 points in this mode).

Despite not specified as a Hunt round, Ski Fall uses the same mechanics.

Team rounds are present in Squads Show. Only one squad can be on a team, so Team games only appear later in the show. As a result, Fall Ball, Jinxed, Basketfall, and Power Trip (i.e. team games with two teams) can act as final rounds in Squads Show.

Unlike Main Show, it is possible for there to be multiple team games after each other. For example, Team Tail Tag into Snowy Scrap into Jinxed.

In extremely contrived scenarios, if a Team round is selected as the Final, both teams can share the win by keeping the scores tied for map-specific timeout durations. (As these timeout durations tend to be ridiculously long, the guaranteed win may not necessarily be worth the increased time expenditure.)

20.[5] It is currently unknown if a win in Squads Show counts towards the Weekly Crown League, though it seems unlikely.[6]

Finals requiring the player not to get slimed (Hex-A-Gone, Thin Ice, etc.) do not automatically end when only one squad is left, meaning all but one player from the winning squad would have to intentionally get eliminated to end the round (other than timing it out).

While Royal Fumble was initially in the round pool, it was removed in a hotfix on 24 March 2021, due to some instances where the squad without the tail won.

While Jump Showdown was initially in the round pool, it was removed in a hotfix on 25 March 2021, due to timeouts randomly awarding a squad the win (rather than all squads getting the win).

Before Season 6.1, timeouts in elimination-type finals did NOT award all squads with at least one member alive the win; the winning team is randomly selected. It is unclear if this is influenced by having a lower ping to the server, and/or having more members of the team alive when the round times out. As of Season 6.1, this is no longer the case (at least for Jump Showdown), and timeouts should now award all surviving players the win.