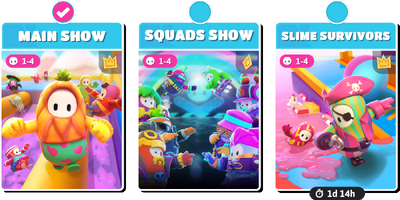 Show Selector, introduced in Season 2, gives players the option of what kind of Fall Guys: Ultimate Knockout rounds they would like to play based on what playlist they choose.

There are two playlists which can always be selected:

Starting from October 2020, along with the Main Show, some special playlists are available only for a certain amount of days, usually a week. A new playlist usually (but not always) starts after the previous one has ended, at 13:00 BST.

) go, but the rounds that may be selected are different. Starting from Season 4, this may no longer be the case.

From November 10th 2020, multiple playlists can be selected to be queued for, and different region servers have been introduced.

From December 15th 2020, the game will now display which playlist type was chosen if you queue for multiple. Also, on Steam, a new button prompt will allow players to enter a code to join a custom show host's lobby. Hosting a custom show is currently limited to a selected bunch of content creators, and still requires the minimum number of players in a playlist to start a game (40 for Main Show and most alternate playlists).

Starting from Season 4, some playlists, instead of giving

1 for winning, may give different rewards instead (ranging from more

). Any exceptions are noted in the descriptions.