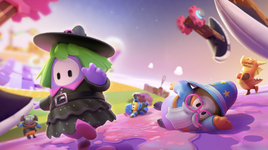 Season 2 added four new Rounds available to appear in Shows: Knight Fever, Wall Guys, Hoopsie Legends and Egg Siege. Like the season itself, the theme of these rounds is medieval, so obstacles like Swinging Axes are present, and courses are all castle inspired. The old games did not receive any medieval rextexturing, but some improvements were made; further details are present in each round's article.

Mid-season, Season 2 received an update, which introduced the new level Big Fans, a different system of naming for PC players, the possibility of queuing shows, and variations to most rounds, which can be seen in each round's article.

Season 2 introduced the Show Selector, which gives players the option to choose, along with the Main Show, a different special weekly playlist, where only specific rounds can be played.

Customization was updated; Nicknames and Banners were added to add more customization to how players appear in-game.

The appearance of the main menu and loading screen changed, adding various Middle Ages-related designs like skulls and axes. Starting from this season, when multiple people play together, they appear falling together in the loading screen while waiting for the show to populate.

New music tracks were added, and the main theme was rearranged; keeping the same track but with a medieval style.

The Fame totals required to reach each new level were tweaked to be lower for the latter levels.