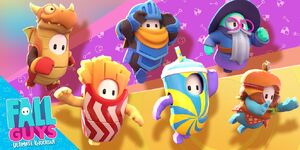 Costumes from the Dragon Hugger and Fast Food costume packs.

A variety of costumes are available in Fall Guys: Ultimate Knockout that allows the player to customize the appearance of their Fall Guy. Below is a list of all costumes available in the game, starting with Season 1.

Costumes, in the game, are divided into upper, which are for the top of the character, and lower, for the bottom of the character. The two different parts of the costume give form to a complete costume, but they are sold (or obtained as a reward) separately. This means that you can have the upper part of a costume, but not the lower, or vice versa. You can mix costumes in any way you want to create the best combination for your character. Costumes are only for aesthetics, and they don't affect at all the moveset of your character in-game.

Costumes that were added to the game files, but were not made available in-game, yet.