Stay in the zone!

Stay in the score zone in the sky!

Airtime is one of the rounds in Fall Guys: Ultimate Knockout. This round is a hunt round and was first introduced in Season 6.[1]

Airtime is a hunt round which contains a scoring zone where the players can get points to qualify. Staying in the zone gives roughly 4% for every second in the zone.

Players spawns in two platforms, each facing a Big Swingus.

The arena consists in multiple obstacles which can be used as platforms for the players to stay in the zone, if the player falls off the zone, they'll find themselves on the lower part of the arena: a funnel-shaped area with many Slingus Flinguses that can get the player back to the scoring zone, and six downward-facing Vacuum Tubes at its center which lead them back to either spawn points.

Those are the sections that can be found in the zone:

This section contains fans in a big cylinder which also holds punching gloves and donut bumpers that can knock the player down. 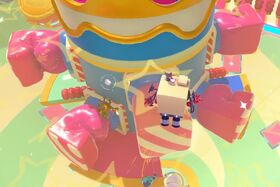 This section contains a conveyor belt with moving donut bumpers arranged in a line across the belt. They can push the player down. There is a Big Swingus in the opposite side of the conveyor belt. 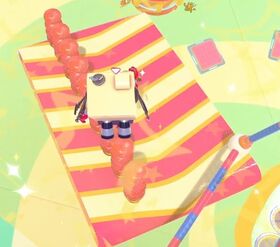 This section contains eight upwards facing drums and a big side-switching blizzard fan that can make the players fall down.

This section contains one single pivot platform with one Big Swingus on each side.

This section contains a single rotating beam on top of a 360 see saw, also accompanied by a big side-switching blizzard fan.

This is unequivocally the hardest section to score percentage from, but if you'd like to practice your skills - land on the spinning fan, walk in the direction opposite to its spin direction (balancing on the edge so you avoid the donut bumpers), and jump-dive onto the other fan blade as it emerges from under the punching glove - all while avoiding the punching glove behind you. It is still recommended to score percentage from other easier sections, however.

If you see it off to the distance in the right from your spawn, use the angled drum on the right to bounce to it. Bounce as best on the drums as you can, while keeping out of the way of the periodically-turning fan. The drums move slowly, so it is easy to see in which direction they'll be moving, and continue safely bouncing on one until you may be blown off.

This is currently the easiest section. Wait on the platform until you see it beginning to tilt, then run towards the side of the platform raising up, jump and grab onto the Big Swingus. Hold onto it until the platform becomes safe to land on, then drop onto the platform. Repeat.

Alternatively, you can also jump on top of the Swingus and then just stay there indefinitely, but this is harder to pull off.

If you see it off to the distance in the right from your spawn, use the angled drum on the right to bounce to it. Carefully balance on the 360 see saw as best as you can while jumping the beam. You can attempt to hide to the left side of the see saw so you don't get blown down by the fan. Be aware, however that the see saw may tilt in such a way that its surface actually remains below the scoring zone, meaning you won't score any points while standing there.

Alternatively, it is possible to use the many Big Swinguses that bridge all the different sections (except the center section) to run laps around the arena while remaining within the scoring zone.

One of the conveyor belts on airtime is using Season 1 visuals, instead of the thematically appropriate Season 6 ones, but it is also failing to display its usual animation, making it seem like it is deactivated. The bug is merely visual however, meaning the conveyor belt works as intended.

*This name is a conjectural name and has not been somewhat uniformly agreed upon.